Hugh Johnson Holt was born in Fresno, California in 1963. The son of a career sheet metal worker, he was introduced at an early age to the tools and techniques of metal working. As an adult, he spent many years using his skills to earn a living through multiple creative endeavors. Later, after fabricating a metal piece as a gift for a loved one, he realized that he also had tremendous potential as an artist and as a designer. It was this fortuitous epiphany that started him on his path as an artist and sculptor. His work was instantly received, and despite little formal training in the arts, his work sold as fast as he could produce it. As his success grew, so did the size of his works, leading him to his present phase of creating large scale abstract sculpture.

The common thread throughout his impressive body of work is the celebration of the power of the simple form. His work does not rely on a complicated narrative, but rather engages the viewer with the simple beauty of organic forms. Tension and grace, power and surrender all meld seamlessly into his sculptures. The mysteries and meanings behind his own inspirations are kept secret, allowing the viewer to form his or her own opinion and reactions to his work.

Clients include both corporate and prestigious private collections and galleries throughout the Western United States.

Gallery Without Walls, Lake Oswego, OR

Tasked with bringing complex designs and concepts to life. Clients included global entertainment brands such as The Walt Disney Company, Cirque du Soleil, Universal Studios, The Michael Jackson Tours, The Olympics, and The Blue Man Group, as well as many international performance and stage companies. 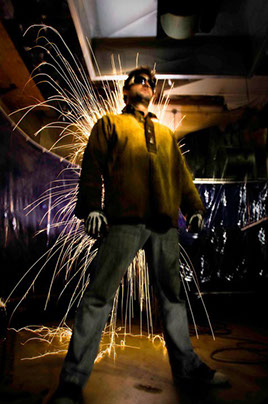